The Acts of the Lords of Rannick, XXXVIII

Oh, they'll get you. Just you wait.

Thursday’s adversaries traveled from very far away to bog the party down, from the Cthulhu Mythos, to be specific. Anyone who has played CoC knows that there is never really any actual victory against such foes. You just send them back to where or when they came from, sever their link to this dimension or make them lie eternally for a little bit longer.

Having wrapped up the fight with the Armoured Undead Giants and looting the bodies, the party lined up to press further on into the ancient Thassilonian complex. Dagfinn and Wheezy stayed behind, although out in the open, because Wheezy is still nervous about standing next to walls with the Scanderig still out there.

The party first advanced down the small passageway that led to what looked like a small square room. It turned out to be an exceptionally tall room; a vaulted ceiling way above the current level. The shaft appeared to have been deliberately sealed in various places far above. As they were mulling over the possible use of the shaft, they spotted a vast round shape leaping from one side to another. This convinced them to get out of the small space as quickly as possible. Backing out, they proceeded down the wider hallway cautiously.

Taking the bend in the corridor, the torchlight revealed a long passage that terminated in a ramp down that led to a pair of enormous doors. The doors were bronze, but inlaid with gleaming silver in the shape of the Sihedron star. On the right side of the passageway, another passageway branched off and another set of doors near the head of the ramp.

Kerplak led the way, testing for traps. They chose the open passageway, of all the options available, after Torgor noticed that there had been very little traffic to the big doors, but quite a bit off to the right. This right-hand passage terminated in two doors. Kerplak thoroughly examined one of the doors and, finally content, opened it a crack.

Inside, torchlight illuminated a bizarre chamber of curiously rounded walls. Every angle had been smoothed, distorting the original shape of whatever had been here before. Making their way through the odd cave-like chamber, they were stopped by sudden billows of blue grey smoke out of which loped three unworldly figures. 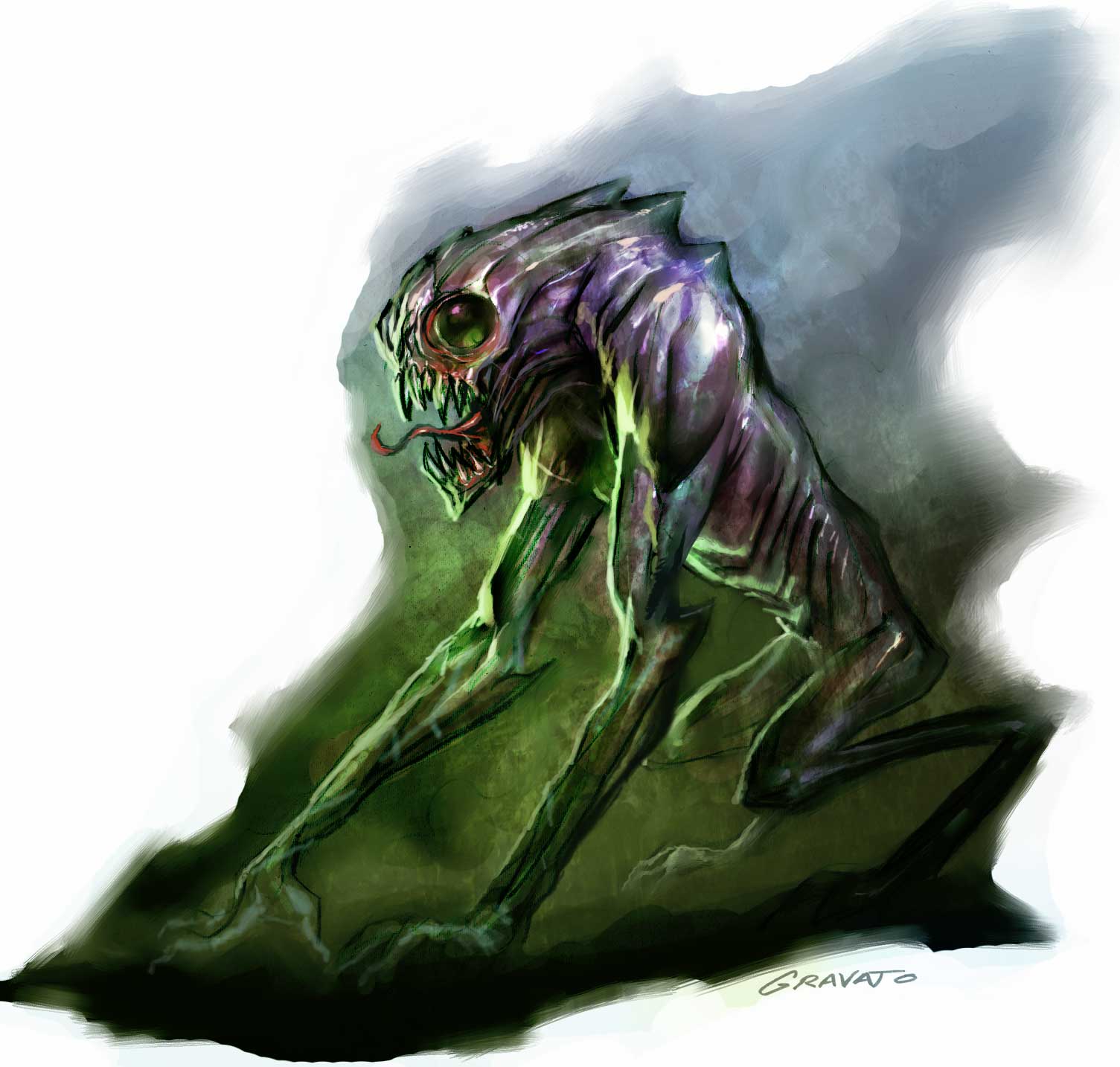 "All the evil in the universe was concentrated in their lean, hungry bodies. Or had they bodies? I saw them only for a moment, I cannot be certain."

Bringing their alien eyes to bear upon Arradin and Kerplak at the fore of the group, matter rippled and tore beneath their terrible gaze, wounds opening and armour splitting  in an instant. They closed with the party, Arradin providing a bulwark against one flank and causing the other two hound-creatures to run around a pillar to engage everyone else.

The fight was viscious. Albedon put some damage on them and everyone else engaged in melee or ranged combat, Don summoning a swarm of bats that were mostly ineffectually.  Arradin, Albedon, and Don all fell under the scything claws and frantic bites of the hounds. The hounds lashed out with their rippling gaze and altered the flow of time around them to fuck over Torgor and Don and to make their own attacks more frenetic. Kerplak, having taken a lot of damage, had backed off and downed a Potion of Invisibility. He cast Mage Hand and put a Potion of Cure Moderate Wounds in it to feed to Albedon. Torgor backed off as the hounds tore through everyone else, switching to what turned out to be a pretty effective melee fighter with the gear of the Kobold berserker. When Kerplak’s ghostly paramedic did his work, Albedon popped back up and cast Magic Missile, but it wasn’t enough to put the Outsider down for good.

Here’s where the bat swarm finally paid off. The hound was finally distracted by the swarms as it turned its gaze towards Albedon. This bought him just enough time to whip out one last spell as it closed and did enough damage to banish it in a cloud of grey-blue smoke.

There was a period of substantial healing and recombobulation. Don and Arradin went to check out the other door next to the one that led to this one, but found nothing but rockslide beyond it. Kerplak checked out the door at the far end of the curved room extensively. As they did this, Don heard a voice from the hallway; Dagfinn, Halvard and Wheezy searching for them. They joined the rest of the party in the rounded room.

When he was all done, the group headed through the curved door and into the hallway beyond. Along that hallway lay another set of double doors. Kerpak opened them revealing a corner. Peering around the corner what lay before them was a split level alchemy lab, the floor filled with bubbling beakers and tables littered with pots of chemicals. On the far end of the room, a raised stage, upon which stood a remarkably short Stone Giant. He glared at Kerplak and slid a pair of lenses down over his eyes…

..and that’s where we wrapped up.

← Amazing Probably True Stories
The Acts of The Lords of Rannick, XXXIX →