I’m not entirely convinced our heroes are every going to see the outside of that cave, so I’ll hold off on doing the recap until the situation is more resolved, one way or another. Usually our heroic band has numbers on their side – I don’t think they’ve been outnumbered since Sandpoint. This time though, they are in their opponent’s house and don’t enjoy the luxury of numbers. 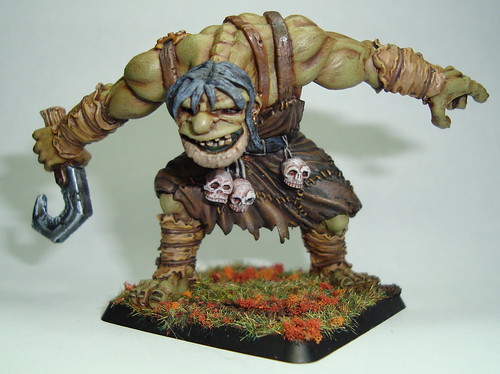 I forgot to keep track of it, but since you are mid combat, it makes sense to carry the criticals over until the end of this particular encounter. You are still in combat initiative order, after all. Once you leave it, they’ll go away, but for now, I think it is fair that you keep them.

In retrospect, that was a fairly awful time to introduce opponent critical hits. While they’re easy to hit, Ogres hit back well and really, really hard. With a bit of planning, I think they’ll prevail. Team Chaos planned well and overcame a tough batch of Trolls, I can’t imagine that adding some heavy hitters and more healing will make things harder.

The rules also include an optional “massive damage” whereby you are forced to make a DC15 Fort save if you lose half your hitpoints from a single attack. Fail the save, you are dead. I opted not to include that and don’t think I’ll change my mind.

The RAW give you until your negative hit points reach your Constitution score before you die. While it technically makes life slightly more lethal at 1st and 2nd levels I prefer the Negative Hit Point totals. 1st and 2nd level is when you should be smote out of existence due to bad luck; dying because of bad luck at level 8 kind of sucks. If your going to die at level 8, it is going to be heroically… or due to stupidity. It is such a fine line sometimes.  Let’s hope there are no enticing rock walls in your future.

Speaking of escalation, I mentioned my Paizo card-buying escalation…

Here is the page on chases, I think this is a great idea. The Chase deck comes out in May and the page explains how they work better than I can. It sounds like they’ll have a mix of terrains to chase people through. I for one, look forward to how many James Bond-style underwater chase scenes you’ll be having.