I don’t have a mound of dead bards, or cylons. But I do have 3 kobolds. 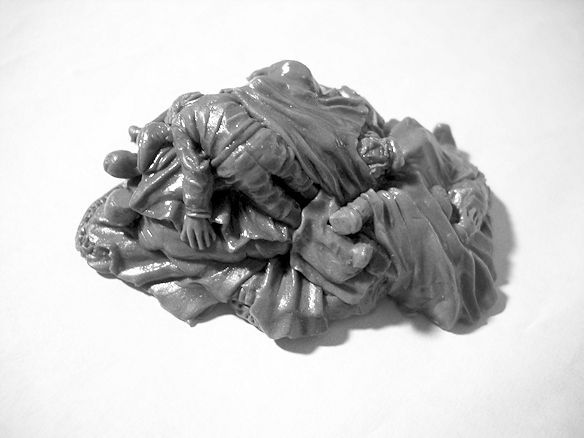 The Mound of Dead Bards miniature. The prize of any collection, surely.

I was going to pick up Battlestar Galactica, the boardgame, but I didn’t.

Of course, this doesn’t affect you: when you show up to play BSG, I’ll have bought it. So that’s good news, right?

So instead I bought something I’d actually use – no, not the mound of dead bards* – but the Pathfinder Bestiary Box.

The range is good and they’ve given you up to three of the medium monsters you’ll face frequently. I’ll try to supplement it further with AP specific cardstock releases as they come out. Miniatures are great and all, but I’m not painting a bunch of Bralani just in case Albedon summons them again (there are two in this set).

The quality of art differs a bit, but is mostly good. The quality of the card seems good and it should put up at least a token resistance to getting General Tso sauce all over it or having one of you ham-fisted drink-spillers knock booze all over them. There are adventurers in there too, but that’s something for which I imagine we’ll always use a miniature. Who doesn’t like picking out a miniature for their dude?

All that said… there are no Skulks or Decapodes in this box… so, um… it’ll be holding a shelf down until you fight something that doesn’t mysteriously resemble a Gatorade lid.

← Happy 40th Birthday Dave Blackmer!
The Acts of the Lords of Rannick, LXXV →

2 Comments on “I don’t have a mound of dead bards, or cylons. But I do have 3 kobolds.”