The Acts of the Lords of Rannick, XXII

The good barge Bersa pulled into Wolf’s Ear and Dagfinn, Kerplak and Albedon went ashore to rendezvous with the rest of the group. Ash and Corwyn, meanwhile, went to find out about the legal ramifications of seizing control of a lake-going vessel (commercial) during a pirate attack. They decided to stay in Wolf’s Ear to clear that up with the court and at the very least make sure they aren’t suddenly wanted for piracy. I wonder what the term is for a mutiny by paying customers…

Anyway, the other half of the party had been tracking the giants northeastward, into the fringes of the dangerous Churlwood. Torgor remained to track the giants as they made their way up the Lampblack River, while Don, Tersplink and Arradin met up with the others in Wolf’s Ear (and, importantly, crossed to the correct side of the Lampblack).
Wolf’s Ear itself was a rather different sort of town than once-festive Sandpoint or prosperous Galduria. The center of town showed a lot of wealth, with new, expensive buildings clustered around the temple of Erastil, a large lodge-house in the middle of the town square. Yet the outskirts of town were decrepit and rundown. Arradin noticed that the town guard weren’t just present, they were present with a capital police state. Others began to get a feel for that too, realizing that the town was patrolled as though expecting trouble at any minute, but not the external Stone-Giant-raiding-party type threat; an internal threat.
The first order of business was to dole out loot. Albedon and Don both picked up new longbows and Don got a nice new Cloak of Resistance (+1 to all saves). That left quite a bit to be converted into cash, so the party took the opportunity to divest themselves of various wands and minor magic items they no longer wanted by selling them to the clerics of Erastil. The clerics had a few things for sale themselves and Dagfinn picked up an Ioun stone from them. I think maybe someone bought a Pearl of Power too. Albedon picked up a scroll or maybe two. 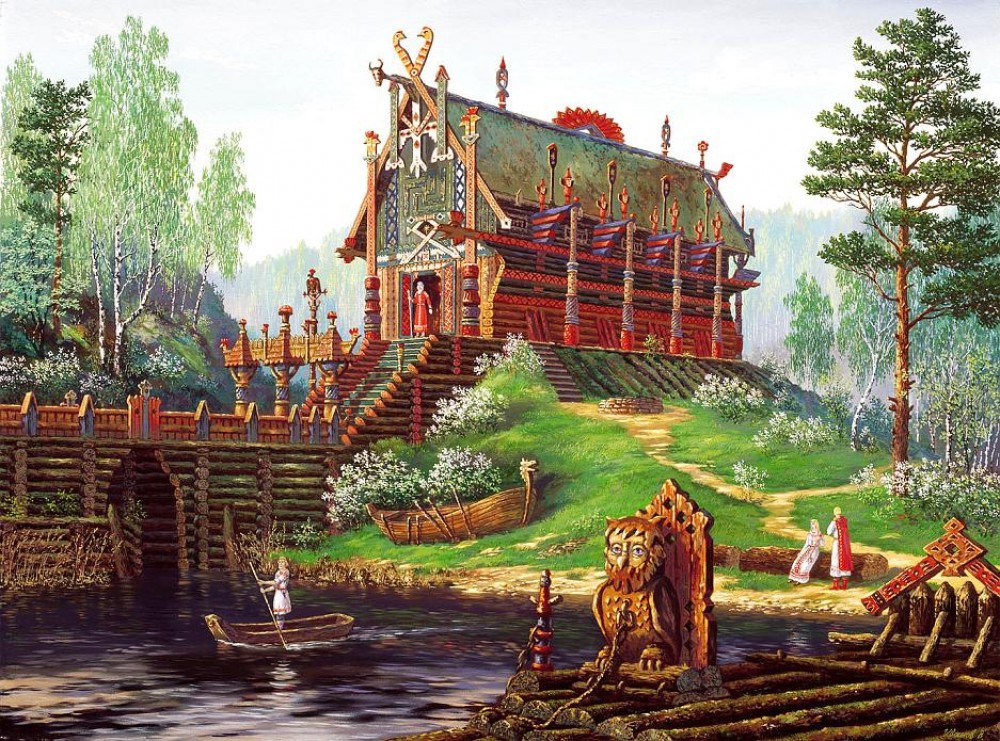 Temples of Erastil are usually pretty cool. This isn't the one in Wolf's Ear though.

The clerics shooed them out of the reliquary as their evening service was about to commence. Most people stuck around for that and noticed that the town seemed quite divided along Chel/Varisian lines, quite unlike most of the egalitarian towns that are loyal to Magnimar.
Don, being a druid was afforded considerable respect by the clergy of Erastil, God of Earth and Beasts. They had a small contemplative garden in which he could sleep. He questioned the clerics about the giant activity – this was the first they’d heard of the raid on Sandpoint. Up until then they had heard of increasing activity of giants; raids on farms, hunting parties attacked and the nearby Shoanti tribe, the Shiikirri-Quah, driven away from their normal area of influence.
Tersplink, being in touch with the wild fey side of his nature in a way his cousin Kerplak can’t even comprehend, decided to camp outside the town. As the night fell, he spotted thin plumes of smoke coming from the many bandit encampments of the Churlwood and heard wolves howling back and forth around Wolf’s Ear.
Everyone else headed to the tavern. They found a slightly dingy tavern on the invisible line between respectable and rundown part of town, The Running Man. It helped that Dagfinn is a mixed-ethnicity Varisian and has the tattoos to back that up; the bouncer waved them on in. The inn was serviceable, nothing fancy, but there was a tension in the air and the patrons seemed a little suspicious of the newcomers.

Eventually though, Dagfinn was invited to view the special wares that the inn stored. Evidently looking to sell these magic items to fund an un-named “cause” there were some interesting items available. Dagfinn ended up buying Kerplak a Necklace of Fireballs (match made in heaven).

The following morning, after a spot of shopping, for provisions and what not; they set out from Wolf’s Ear to continue north. Leaving the town behind them, they pushed their horses a bit while Don and Percy flew ahead to scout out the land. After a few hours, they spotted a farmstead further down the road that was being molested by a group of ogres. The ogres were making clumsy attempts to lead the farm’s cows out into the open grassland. With all haste, the birds returned and alerted the party to the rustling up ahead.
Approaching quickly and through a line of small trees, they found the ogres still attempting to lead the herd away and becoming more and more frustrated. Fortunately they now had more things to vent their frustration on. They ran forward to meet the party, greataxes drawn.
Arradin, taunting the lummox who ran directly at her, chopped her way through the wooden fence and then laid into the ogre. Fearing imminent loss of units of aliveness, she activated her Sihedron medallion, giving her a boost of life-force. They traded some huge blows, but eventually Arradin put him down, without too much help from other people and without Corwyn stepping in to finish off someone she has been whittling down. That isn’t to say that she didn’t get hurt – she did, and sometimes it was by the ogres. She managed to crush her own toe and I think she pulled something too.

Dagfinn, bursting into a rousing song engaged another ogre, with help from some friends. The ogre was disarmed, but it was all Keen Rapier when he nicked an artery on the ogre and caused a regular wound and 11 points of bleed damage. That’s more blood showering out in 6 seconds than most 2nd level characters have… Covered from head to toe in gore, Dagfinn emerged victorious and went to pass out some healing to Arradin.

The arcane magic users meanwhile were helping big style. Tersplink hasted everyone and then cast Displacement on
Arradin and Dagfinn, causing them to appear two feet away from where they really were. This saved their bacon more than a few times. Albedon shot streams of fire, ribbons of lightning, missiles both force and magic; he’s like a one man Cher concert. Through clever maneuvering he was able to angle the Lightning Bolt across two ogres but avoid hitting Tersplink, who had become invisible and was sneaking up to the ogre trying to curse it. So, lucky escape for Tersplink, right?

Not so lucky when it was Kerplak lobbing they damage around. Kerplak took out… everything… and thre it at the ogre who rushed him. A Smoke bomb, then a tanglefoot bag, Dagfinn added a Grease spell, then Alchemist’s Fire, then a flask of Acid which also did cold damage. Not to mention the trauma caused by a grenade launcher with custom-made sabot full of shitty goblin arrows. Working a lot like a blunderbuss, but maybe less focused, the grenade launcher spat out a spray of splintering arrows across a wide spread, peppering the ogre and Terplink in shards of splintering wood and shrapnel. I honestly can’t remember what actually killed that ogre, but it was basically a mercy killing at the end. Murder on the Energy Type Express – spoiler: they all did it.

The last ogre to get in the fight picked up one of the panicked calves and started swinging it by its back legs, including an attack of opportunity at Dagfinn as he healed Arradin; the ogre pummeling the ground with the now dead calf just two feet to the right of where the Displaced Dagfinn actually was… It didn’t stand much of a chance though as the combined focus of the group brought him down quickly.

All was suddenly calm, other than two dozen terrified cows, noisily freaking out mere yards away; so that’s where we left them.

← Not gaming related, but definitely dorky…
In the grim darkness of 70 years ago… →