The Acts of the Lords of Rannick, XI

The Fey are an interesting opponent and by interesting, I mean frustrating. They have a few arrows in their be-a-dick quiver. They use all sorts of illusions and charms, creating confusion more than inflicting damage. And they are slippery – in that as small creatures they think nothing of using hit and run tactics. They are emotional, but not with the kind of drive to make them charge in or try to prove their superiority. They are a somewhat mercurial foe… which in game terms means it can sometimes be hard to wring the XP from the little buggers.
Still, you’re lucky that the D&D ruleset went with the German version of the Nixie. The Norse and Celtic version usually shows up as a particularly nice horse with super-adhesive skin and the moment you touch it, thinking, “Och! A free horse!”/”Börk! Æ fríj hjørs!”, it gallops to the bottom of the loch, drowns you and then eats most, but not all of you. Dick move, fairy, dick move.

Well done, again, to the players last night who managed to avoid metagaming and stuck with the 20ft vision ælimitation and to Rolland, who played his suddenly-can’t-we-all-just-get-along charmed Corwyn well.

After leaving Devarre to attend to his dead animal companion, the party set off north again, following the river that would take them to the set of waterfalls known as Dead Man’s Drop. The persistent mist that had swallowed up Arradin and Badonk now enveloped Lonny. Something funny must be going on here because Lonny couldn’t sneak away from people if he wanted to. After a few seconds of grief over the loss of their beloved Cleric, they continued.

Led by Torgor again, they made good time to the first waterfall, opening onto a wide pool. A gully down one side provided access to the upper pool, but it was wet with moss and rotten tree branches deposited there by yearly flooding. The party decided to climb the treacherous gully – let the faceplanting begin!

It wasn’t a terribly difficult climb, but everyone rolled awfully for it, so we had Kerplak bouncing 20ft back down the rocky gully and others suffered from the difficult footing too. Eventually the plan was hatched to send Corwyn ahead to attach a rope to trees above the gully with which the less dextrous members of the party could haul themselves up. That helped although it didn’t make the trip entirely safe. Midway up the gully it widened and levelled so they stopped there and did the same thing again, with better results.
The gully led them up to a thin shoreline on the eastern side of another large pool, this one fed by two waterfalls. Dagfinn took his first dip of the day, trying to get behind the closest waterfall, alas, this was a a rare waterfall indeed since it did not have a cave behind it,.. because in D&D, they all do. The flow of water was such that he was buffeted into the shallow water and waded back onto the shoreline. They noticed that the mist seemed to pass them in waves here, thickening and thinning and a slow tempo.

As they made their way along the edge of the upper pool, trying to get a feel for the area, they heard a quiet, haunting song from across the water. Corwyn, Torgor and Kerplak were momentarily enthralled by the song, with Kerplak quick to race into the water to discover its presumably beautiful source. Dagfinn and Albedon weren’t so easily fooled and Dagfinn knew that this was just another moment for him to shine. He began a Countersong, drowning out the tempting melody. The only thing that ever works for me to help get earworms out of my head is to whistle “Big Rock Candy Mountain”, so to me, that’s what he did. Srsly, next time you get a song stuck in your head, whistle BRCM. Totally works.
Suddenly, the glassy eyed trio snapped out of it, won over by the majestic power of Dagfinn’s compelling song. Just in time too, because two roiling walls of water rose up from the pools surface. The first surged towards Kerplak, pummeling him with jets of super-pressurized water. The second made its way to shore and began giving Albedon the same treatment.
While the song continued, no-one was buying it anymore and everyone leapt into action against the Water Elementals. Except Kerplak, who just started drowning. His swim rolls were, I believe; a 1, another 1, then something mediocre, then a 20. Pretty sure that was how that worked out. Kerplak was given a moment’s grace when Albedon, having retreated out of the way of the Elemental by the shore, hit Kerplak’s Elemental so hard with a spell that the Elemental ceased to exist within time for 6 seconds: he critically hit the the Elemental out of space and time for a short while. As I mentioned, Kerplak blew his chance to get away and when the Elemental reappeared, full, we must assume, of post-industrial pollutants that it picked up in the far future, it resumed smacking Kerplak.

The shore dwellers found that the Elemental would stay attached to the water if there was someone to hit within range and there usually was. Torgor and Dagfinn were both targets after Albedon, but the wizard’s spells began to wear the Elemental down. Corwyn was having a hell of a time of it, slicing his fingers open on his own spear. Soon, Kerplak had extricated himself from the swirling elemental and was making it back to shore. The shore Elemental had been dispatched, collapsing as spray back into the water. Kerplak’s elemental pursued his quarry and was joined by a diminutive Nixie who emerged from the water, trying to Charm people and put them to sleep with arrows. She appeared to be a 3 foot tall woman, with skin that glittered with scales, finned limbs and long green hair that hung around her like wet seaweed. She wasn’t successful in charming Dagfinn, remarkably, but she did manage to charm Corwyn, who suddenly became very fond of her. Due to the presence of  the Water Elemental, nobody closed for melee, which allowed her to shoot off little arrows which were annoying more than dangerous. As the last Water Elemental collapsed into the pool, taken down by missile attacks, she withdrew into the mist and disappeared.

As the party regrouped and healed up, she reappeared, shot an arrow or two and then disappeared again. This seemed to swing favour away from making camp to rest since she could, conceivably, disturb them all night long. Thus began the “Middle-Manager Day-Retreat Outward-Bound Problem-Solving Team-Building Course” section of the night where they all stood around trying to figure out the best way to cross a pool with umpteen coils of rope, grappling hooks, a gnome and a Scroll of Telekinesis.

It took some discussion, some of which was silly, some of which was clever and none of which involved getting in the water with a Nixie. Everyone seemed to think that this was a bad idea; as bad an idea apparently as putting points in Swim, which no-one has. 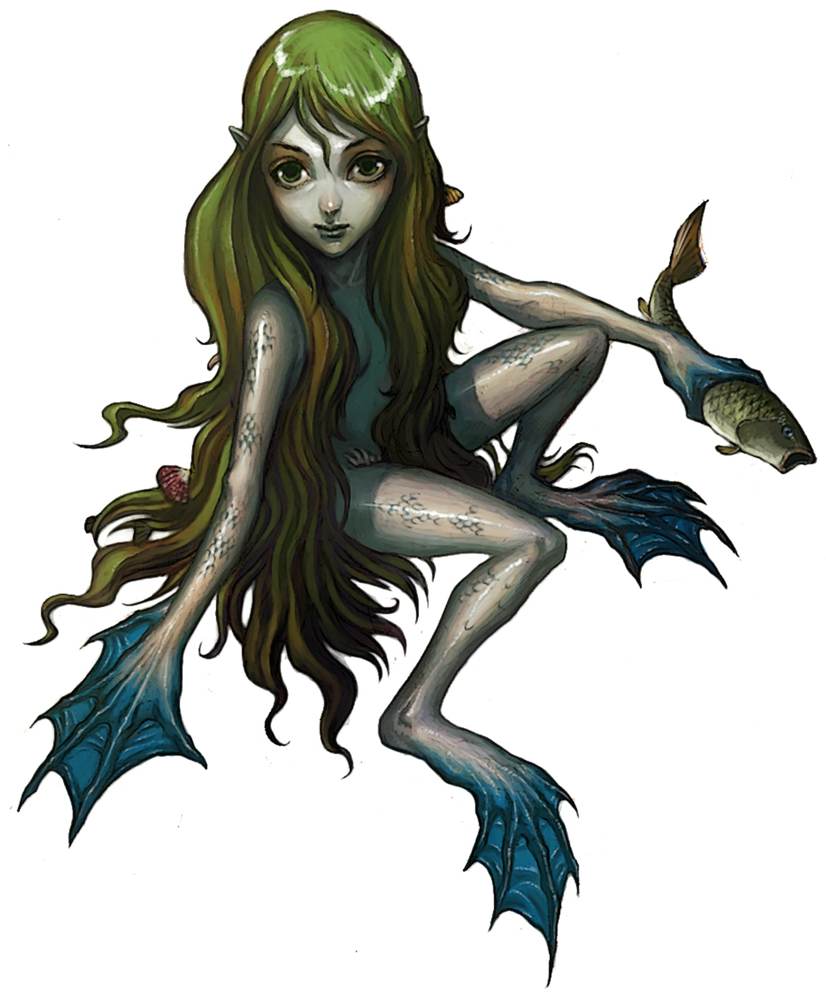 This is what kept everyone from swimming. Stand back everyone, heroes are here!

Eventually, the plan was struck upon to have Albedon cast Telekinesis on Dagfinn, concentrate him across the pool until he reached the rocks and using Percy the Familiar to guide Albedon in this matter. That was quite clever. Weird use of a Telekinesis scroll, but hey, beats swimming 30ft apparently.

Corwyn, meanwhile, had his own plans and was busy mounting the cliff-face using his climbing gear. Between his actual proper climbing gear that he brought and his extremely high quality cold-weather gear, Corwyn may be the world’s first Alpine Rogue. He scaled the cliff, then rigged his own rope and climbed across the top of the waterfall to the center island.

Dagfinn arrived at the nearest large rock in the middle of the pool by the power of Albedon’s mind and was promptly shot by the Nixie. He fell asleep, which would normally be a bad thing, but since Dagfinn was suspended by Albedon, he just hung there, snoozing. Percy showed his usefulness and gave Dagfinn a peck on the cheek, waking him up for 1 point of damage. The Nixie had disappeared by then and Dagfinn attached a grapple securely, with Torgor tying the other end to a tree. Albedon, Torgor and Kerplak began shuffling across the rope.

Another rope was attached to another rock and the process was mirrored, this time slowed down slightly by Dagfinn falling into the water and only prevented from being swept away by Torgor. Once on the second rock, it was a mere jump of ten feet to an opposite shoreline that brought them closer to the second upper-waterfall. Up until this point I think everyone forgot they could jump too.

Sure enough, because this is D&D, this waterfall had a small cave behind it. Nothing as expansive as the one behind Fort Rannick’s waterfall, but still. Dagfinn forged ahead and found an iron chest and 25 faintly glowing stones that matched the description that Devarre had given them. Everyone piled into the cave, Kerplak trying to open the rusted iron chest and Torgor making sure he didn’t pocket the contents as soon as he opened it. Albedon and Dagfinn began picking up the rocks and storing them somewhere we never really specified. There are about 64lbs of fairy masonry there…

Inside the chest, Kerplak and Torgor found a bandit’s hoard of gold and silver, a masterwork longsword and hammer, two potion bottles and a wand of some sort. Albedon, heart a-flutter at the sight of the wand, cast Detect Magi-… no he didn’t, because he didn’t memorize it today. He was still carrying around his Wedding Day spell-list.

Meanwhile, 50ft above them on the ledge, Corwyn believed he had discovered the source of the rolling waves of mist. Every few seconds, the mist cleared below him and peering down into the water he could see a faint greenish glow. As his fellows larked about in the cave, debating the merits of particular approaches to arcane spellcasting, he saw what looked like a salmon speed by, followed by the green glow, which suddenly lurched through the water after the salmon.

In the cave, the looters were disturbed when the curtain of falling water was broken and a large, glowing Water Elemental surged through, roaring like a rolling wave.  That’s where we left them…

2 Comments on “The Acts of the Lords of Rannick, XI”