The Acts of the Lords of Rannick, VII

Lonny, Corwyn, Dagfinn, Tersplink and Arradin left Baaz, Torgor and Kerplak guarding their retreat and ventured further up the one upper passage they hadn’t yet explored. It forked in two and they chose to go left, Corwyn securing the area and checking for any traps. They found an old shrine, apparently no longer in use, to Lamashtu. A statue of the Mother of Monsters had been knocked against a wall of the shrine amidst the remnants of offerings to her, now all dried or rotted. 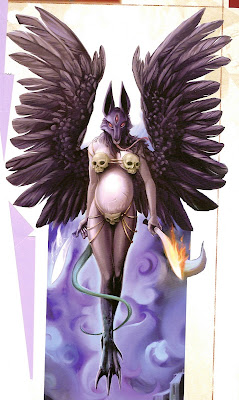 Offended at the mere presence of the statue, Lonny set to destroying it, the sounds of his pick smashing statuary ringing out through the caves. After appropriately wrecking the shrine, the party wandered down the other branch of the fork. The passageway led to a large chamber, long and curved. The passageway fed into a ramp up towards a great stone chair, on the high ledges on either side of the ramp, crudely carved, angular, stone heads loomed. Above, a crack in the cave’s ceiling showed daylight.

As the party entered, a huge figure floated down from the shadows near the ceiling. A potbellied Stone Giant, the figure hovered 30ft from the floor before the stone throne and laughed at the interlopers. He barked some harsh words in gravelly giant and another Stone Giant emerged on the ledge above the party, wielding the better part of a tree as a club. He hauled a rock at Corwyn but narrowly missed him. Corwyn began casting his magical spear at the Giant. Dagfinn and Arradin sprang into action, clambering up onto the ledge. Lonny attempted to hold the Giant with a spell but the Giant repeatedly shrugged off the effects after a few seconds of paralysis.

Tersplink cast Haste on the party Baaz showed, attracted by the sudden commotion. As Dagfinn and Arradin flanked the briefly freezing giant, it lashed out at Arradin whacking her with its Greatclub. Corwyn, Arradin and Dagfinn were able to bring the Giant down quickly. While Baaz rushed forward to meet the floating Stone Giant who had begun casting spells at various party members. Baaz was the recipient of a Bull’s Strength and Fly spell, readying him to fight the flying wizard, but the Stone Giant spellcaster cast a Fear spell, causing Baaz to fly away at top speed, in a panic. Lonny scrambled up the shallow end of the ledge and healed Arradin.

The next move by the Stone Giant spellcaster was to paralyze Dagfinn. Dagfinn froze mid-song. He then began lashing out with spells at Tersplink who had begun assailing him with his Shocking Grasp spells. Lonny contributed Acid Dart volleys and Corwyn continued to hurl his returning spear until it snagged in the rocky skin of the Stone Giant. Arradin added arrows to this missile assault but somehow ended up shooting him before landing a decent shot that rattled the beleagured Stone Giant. By this point the Giant was hurling powerful spell after spell at Tersplink, including a wand that would have drained the very lifeforce from him. No matter how hard he tried, he could not land a hit on the gnome and eventually he snatched up a massive Earthbreaker maul in order to put an end to the gnome once and for all. The distraction couldn’t stop the relentless attacks and Tersplink finally delivered a powerful Shocking Grasp spell via his Spectral Hand. This last shock caused the giant to spasm and then fall to the ground, dead.

After Baaz had recovered his nerve and Dagfinn had recovered control over his muscles everyone set to searching this hall/cave. They found few items of interest except a Ring of Cold Resistance which Corwyn took and the Wand of Enervation that the Giant threatened to drain Tersplink with. They did notice that the Giant had a magical symbol on his chest in the form of the Sihedron medallion but after a few minutes it abruptly disappeared. Other than that, they found a pouch containing his spellbook and some black Onyx gems. Tired after their fight and their spells drained, they decided to rest. Arradin and Baaz kept watch while the others slept but were not disturbed.

When they woke they proceeded to the mine shafts and had the argument about whether they should go down the mine or collapse the mine for the second time that day and probably fifth or sixth over the past few days. They decided to go down the mine, only to find it seemingly empty of ogre miners. Every so often they passed the frozen corpse of an emaciated ogre, dressed in rags and evidently flogged before death. The mines revealed runs of blood ore, from which the ogres were extracting iron for their sword manufacturing. After six hours of searching the unstable mine passageways, the party returned to the Clanhold.

There remained only a decision to make about the enormous black statue. Dagfinn climbed up and hoisted the Sihedron Medallion from around its neck, which caused the body to turn to dry, coal-like dust beneath him. He fell to the frozen cave floor with the gargantuan gilded armour with which the statue had been adorned. After parcelling out the huge plates of metal so that it could be sold to an interested/gargantuan collector, they made their way carefully down Hook Mountain.

Exhausted, they reached Fort Rannick and were accosted by Yap who had been sent to thank everyone, but especially to thank Baaz. He offered to remove the map to Hook Mountain from Baaz’s head, but Baaz declined. He told Baaz that Myriana had also warned him against going to the Beekeeper and also had prepared a thank you gift.

Later, Baaz discovered that the thank you gift was his very own Fey Dojo, hidden in an extra-dimensional space disguised as a Weeping Willow. Add to that the skillfully made symbol of Irori that Corwyn gave him Baaz as a gift and everthing is coming up Baaz!

The next day, they were notified that they had received three invitations (yes, three invitations, I forgot to mention all of them): Lonny was called to the Council of Usher’s springtime meeting in Magnimar,  everyone was invited to Vale Temros’s wedding in Whartle in the spring and Dagfinn, Lonny and Kerplak were invited as guests of honour to the Sandpoint Swallowtail Festival in the autumn, a year to the day of their heroic rescue of Sandpoint from the goblins.

The party has the tail end of winter to wait out first, but that was where we left them.

The More You Know:

Dagfinn was keen to make sure that the massacre at Hook Mountain was appropriately genocide-y, taking care to make sure that the Kreeg clan didn’t just breed a new army by eliminating the women and children of the Ogre tribe. Torgor is able to fill Dagfinn in on the family structure amongst the Ogres and Ogre-kin.

Quite unlike Giants, Ogres have no multi-family groups. While power in the tribe is wielded by the most dangerous male, the family’s survival hinges on the family’s sole female. She coughs out litters of 6-8 ogres within a few months of pregnancy and within a decade these are fully grown, if they are born male. If they are born female, (usually only one per litter) they are strangled, because the dominant female doesn’t want the competition. Instead she breeds with most of the strongest members in her family who are, almost inevitably, also her father, uncles and eventually her own sons. This continues until she is super old or dies in childbirth in which case any female children are allowed to live. This kind of incestuous inbreeding makes for a great many mutations among half-ogres (like the despicable Graul family) but seems to have no adverse effects on the ogres – which is to say they don’t get increasingly ugly or stupid as time goes on. Ogre family trees are full of complicated relationship indicators since it is entirely possible for Ogre A to be Ogre B’s son and brother at the same time. Dorella Kreeg was killed at Fort Rannick which meant the Kreeg clan would have had to go begging for a female child from a rival clan, something which would probably cost them half their number in slaves.