After finishing off Mass Effect 3, I was at a loss because it seems like we are in kind of a xbox360 drought at the moment. I SHOULD be looking forward to Assassin’s Creed 3, but I’m a lot less excited about it now that it is set in North America. Because that looks boring. If you put the AC game in a place where there were no tall buildings, densely arranged, you remove one of the signature elements of the game and I’d have to learn to like it all over again. My only hope is that AC3.1 is a gateway to AC3.2 French Revolution, but at this point I’m doubtful.

Back on topic, I picked up Kingdoms of Amalur.

Kingdoms of Amalur has kind of an impressive pedigree in that the visual design was by Todd MacFarlane (I’ve never been a fan, but it should promise something pretty impressive with a name attached), the background and story by R.A. Salvatore (you know) and the executive director was Ken Rolston (who has written for WFRP, Paranoia, and a bunch of paper and pen games, as well as The Elder Scrolls series). Aaaaaand, it was produced by Curt Schilling’s company 38 Studios. Yes, the baseball player Curt Schilling. He said it would be like a cross between God of War and the ESiv: Oblivion. And you know what? He was right!

Kingdoms of Amalur is exactly like two games from 6 years ago smooshed together. That doesn’t mean it is bad, it’s just not… as groundbreaking or impressive as you would think. And some of that probably has to do with the big names.

The first thing you think when you play KOA is “WoW!” Not as in the exclamation of surprise, but as in “Todd MacFarlane appears to have fired up the Night Elf starter area of World of Warcraft, looked at and said “Guys, just do this.” Every thing from the chunky shapes to the textures to the gnomish facial hair is pretty much familiar if you’ve played WoW. I’m waiting to see one thing that says, Yeah, that’s the guy that did Spawn and some of my favourite Spidermans. Some of the creatures you fight, I guess, look a little MacFarlane-y, but they move at a blur and you kill them in explosions, so it isn’t like you ever get a chance to marvel at them.

RA Salvatore, meanwhile, wrote down everything he knows about Celtic Mythology. I’m fine with that, he does do a good job of capturing the capricious menace of the fey races, its just… a bit much.

There’s elves, but they’re split into two races, but they’re not the same thing as the fae, who are… elves (only with two points on their ears), who are connected somehow to all the other fae stuff like brownies (who make adorable cooing noises), boggarts (you don’t appreciate them until you find a sleeping one and wake them up, because that’s the only time you see how they are put together – it’s a cool concept, but one you miss because of the frenetic combat system), sprites etc. Then there are giant races. I’m not sure how they fit in to the geneaology. Killing the giant races and humans is the only way I can feel like a hero. They’re vicious little buggers, but I can’t feel heroic beating up Brownies. Carol came in while I was playing one day and watched for a second. “Are you killing fairies?” she asked. I was, I was killing fairies. I’m not proud of it.

So the art isn’t stand-out enough and the setting is maybe a little too stand-out. And the interface looks pretty dated. The voice acting is like a trip through the Shakopee Ren Fest on Irish Weekend. The map lets you fast travel to discovered locations, but not to quest objectives, so if a quest objective is covering your discovered location… you can’t easily choose it. Oh and the camera stays too close to your dude.

What KOA has to commend it is:

Remember Skyrim? Remember Fallout 3? Why was there so little colour? I realise everything was covered in snow/ash, but even on people’s clothes, you could at best see a shade of muted-‘insert actual colour’ there. Even the fire was peely-wally.  I get it, your game is supposed to be “gritty”, but making the landscape so goddamn brown and white is a cheap substitute for gritty content: don’t make me beat you with the Red Dead Redemption stick, Bethesda. That game had impressive vistas and a grab-you-by-the-nuts story. KOA goes kind of berserk with colour, but I’m fine with that.

And combat is fun, FUN! You button mash and roll around and stab and shoot arrows and shoot spells and time your button taps for combos and special attacks. Then when you do that enough, you enable bullet time and go around disabling everyone you are fighting before unleashing a comically stupid, grandiose finishing move that kills people with strands of their own fate! It’s stupid! It’s fun! Favourite OTT finishing move so far – beat the opponent down in bullet time, throw them to the ground, weave a massive spike of glowing fate, plant it in the ground, pick the frantically kicking opponent up and throw them on the spike. Looks awesome when you do it to a nasty big guy who totally deserved it – makes you look like a psychopathic war-criminal when you do it to a 3′ Brownie who had the audacity to stand in front of the flower you wanted to pick. 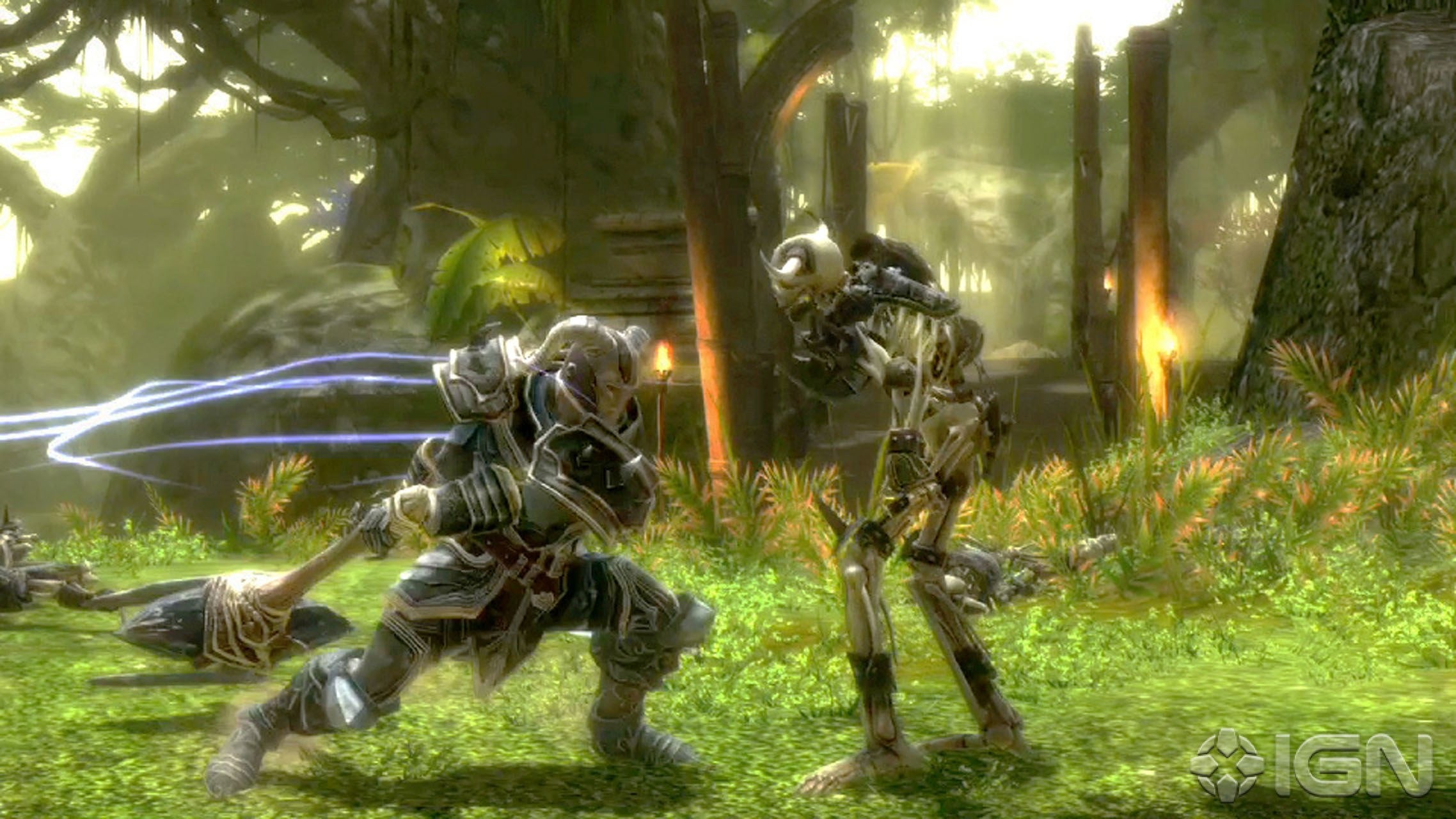 See, it is like Skyrim, only with a colour palette and decent hand to hand mechanics.

It isn’t a sandbox, but it isn’t small either. Technically, you can tool around the really enormous map, but eventually you’ll run into things that kill you easily. It feels like a smaller game than it is sometimes, which is why I thought of it as an american Fable III. But it is bigger than the Fables. How big I don’t know, I haven’t left the 1st big collection of areas.

In conclusion: It should have been special, and may have been 6 years ago, but it isn’t. That doesn’t mean it isn’t knock-about fun. And it is some welcome relief from grey and brown.

In even more definite conclusion: 38 Studios went bankrupt, so don’t look for Curt Schilling top release a patch to fix that camera closeness any time soon.

2 Comments on “Kingdoms of Amalotlikeabunchofothergames”