The Acts of the Lords of Rannick, XXXVI

Thanks to Ben and Noe for the bread and chili last night. That was boss. I hope the tears of the Fresh Wok chefs made the food they sold to other people all the more delicious. I had a lot of fun last night, mostly because it was jokes about dog dicks and spells of tremendous arcane power as masturbatory aids. But also nobody died and everybody kept Halvard alive long enough that he could end a fight that maybe only he could end; and all this despite Rolland rolling his own dice.
The rest period, however long it had to be to get spells back, passed without incident. The chain of dwarves who were willing to die signalling danger stood firm and after the initial glimpse of searching Stone Giants, no further intrusions threatened.Team Stand-At-The-Front-And-Get-Pummelled were up first, thanks to Arradin’s need for only chill time and Halvard’s Ring of Sustenance which is the source of some envy. Everyone else woke in their own sweet time, refreshed and ready to go. I’m not sure what time of day it is now, but since you are underground, the party probably doesn’t either. It’ll be a surprise for all of us!Once up and ready, the problem of light was addressed, what with no-one being able to see in pitch black. Halvard cast Light upon his Greatsword, which is awesome and Dagfinn also had a light spell up. Between the two of them they provided everyone with enough light to work with. Let’s take a moment to review light, because we weren’t doing that quite right: races with low-light vision double the effective radius of light effects, so while Halvard with glowing sword can see 20ft away perfectly and 20ft-40ft away dimly (20% concealment chance, perception penalties), Kerplak standing right next to him can see up to 40ft away perfectly and 40ft-80ft away dimly (still with concealment chance and penalties). So don’t anyone with low-light vision get too carried away. Dwarves and Half-Orcs are the only races who don’t need light. The good news for Torgor and Kerplak is that dim light allows you to enter stealth without obscuring yourself behind something, although dim light is determined by what the observer sees, not what you see, i.e. don’t try that shit 41ft from a half-orc.

I fucking saw that! You put that back where you got it.

Well, I’m sure that’s cleared that up.The party reached the bottom of the spiralling ramp and proceeded down the hallway to a left-right 90 degree split. Down the leftmost hallway, there was a wall of rock where geological disturbance had sheared into the structure. Down the other was a small ante-chamber with a set of double doors.Bustling to the front in a nice tight-knit group, all the better to be caught in AoE traps, they opened the door to reveal a rounded chamber beyond. The floors and wall were a sparkly black marble and the far wall had collapsed a bit, creating a rockfall into the room. More marble doors to the south presented the only exit. As they took in the details of the room, (which Don surmised was of the same construction as the Mummy’s tower above), they couldn’t fail to notice the strange effect on the room. Unhooked from such notions as width, length and depth, the walls of the room swam and bent in the peripheral vision of the party, one wall seeming terribly far away one minute and curving closely towards them the next. Don decided to BAMF into a Dire Bat and echoed the chamber, which came back as normal to him. He flew around it, checking it out. 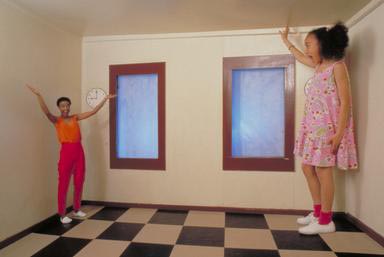 Aaaagh, it's one of those rooms!

Dagfinn and Kerplak entered the room and to anyone not watching them, they may have seemed to bend and shrink with the changing dimensions of the room. They became nauseated and shrank, Kerplak going down to Tiny and Dagfinn becoming Small. As the party was digesting this, Halvard and Don both sensed some small movement from the rubble pile and a moment later a Giant leapt out of his hiding rubble and launched a stone at Halvard’s head. The stone seemed to get further away and spiral and all sorts of freaky stuff, but most importantly it missed Halvard, crashing into the doorway beside him.The giant was a twisted thing; once a Hill Giant, its bones had bent under the weight of massively enlarged musculature and all over its body, light shone from glowing runes. Halvard and Don, who attacked him with his Dire Bat fangs, both eventually engaged the Giant with their feet on the floor and were also changed by the peculiar effects of the room. The giant swung his greatclub back and forth, on two instances missing people who had just shrunk by swinging over their heads. Halvard Blessed the whole party, while Torgor added his Giant-baiting bonus and Dagfinn sang. Topped up with bonuses as the party was, the giant didn’t last too long. He staggered Halvard, who stepped back and healed himself, but found himself Confused courtesy of Tersplink, who realised that this giant had a brain like a tub of shredded jello and cast Hideous Laughter. I’m not sure that has ever worked before, but whatever it was it traumatized the Giant’s funny bone, because he fell to the ground, rolling around laughing hysterically. Kerplak… tiny Kerplak stepped out of the Stealth he’d achieved behind Dagfinn’s legs and peppered the giant with tiny crossbow bolts. A-dorable. The first one went straight to the giant’s heart, yet amidst the fountain of blood, the giant kept laughing uproariously. Two more bolts to the head stopped that shit cold. 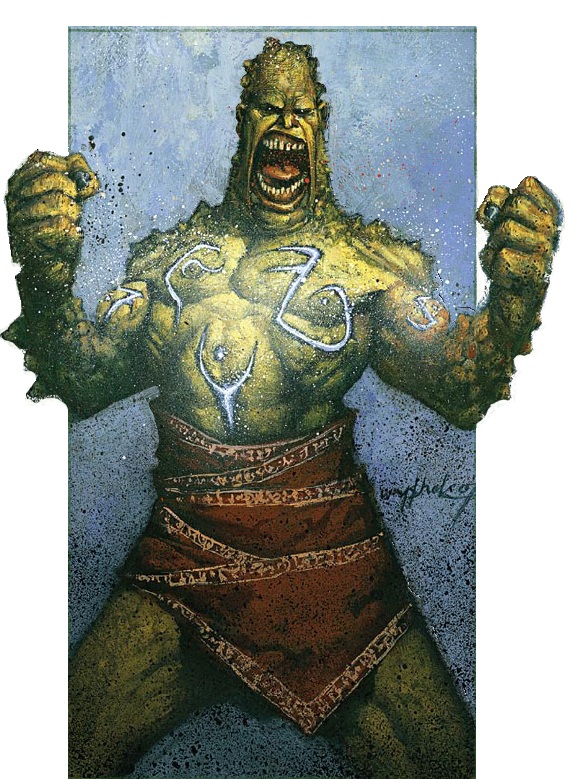 Arradin and Torgor had been keeping up missile support but along with Tersplink were reluctant to test their saving throws against the Enlittling room. Tersplink cast Fly on Arradin who ferried Torgor and Tersplink over the trapped floor. Kerplak was unable to figure out how to deactivate the trap, but had a good idea of how the trap was put together and CAN try again, if he spends 2d4 rounds doing so.On the other side of the room’s exit, Dagfinn burned through all of his level 3 allotments to Dispel Magic on the shrunken people. That’s actually an opposed check, Dagfinn’s Dispelling against the level of the spell, but I forgot that and also forgot that Mike doesn’t read spell descriptions, so everyone is back to their normal size. The next room was a large rectangular room, with three thick columns supporting the ceiling and three passageways leading off to the west. The walls of the room were banded with runes, but the main point of interest was a vast pot of some sort. 12′ tall by 30′ or so (I forget), it stood over a firepit of glowing logs on three sturdy legs and smelled dreadful. Human remains clung to the edges of the enormous cauldron.Kerplak, Torgor and Dagfinn briefly investigated the western passageways. Down each, the light of the torch glittered off of what appeared to be suits of armour, arranged in some kind of display in each room.Other people approached the cauldron, which may have given Arradin and Don a false sense of security. Torgor and Kerplak stayed back, but Don approached to try to wreck the cauldron with a Rusting Grasp spell and Arradin flew to the top of the cauldron to see inside. She had time to see a stone humanoid wading around the terrible soupy liquid, essentially stirring it with his body. Then she went blind and became nauseated. And so did Don, who shares her altruistic selfless approach to life, maybe. The two retreated from the pot in a panic as the Stone Golem climbed over the edge.

Halvard stepped up to fill the meat shield role after first dousing the logs beneath the pot in 16 gallons of water. Dagfinn and Tersplink filled everyone in on why Stone Golems suck, they’re immune to all sorts of stuff and really tough to hit with weapons that aren’t insanely magical or made of Adamantium. Torgor seemed to seize the implications of this, because instead of futile arrow fire, he prepped a Cure Moderate Wounds flask, ready to pour down someone’s throat. That’s thinking ahead.
Arradin spent the entire combat hovering at the back of the room, waiting to stop barfing and get her vision back. Regrettably, she’d had Rage cast on her by Halvard, so she was furious about the whole situation too. Don did for most of the fight too, but when Don’s vision returned Halvard had already called down a few favours from Gorum. Casting True Strike first, then Channelling Smite on the Golem he gave it everything he had and the glowing greatsword cut into the stone. That’s kind of cool because Gorum’s holy symbol is a sword stuck in a mountain, so there is symbolism there for Halvard. I’m pretty certain that makes him King of the Romano-British too.Halvard took a pasting from the Stone Golem and may have fallen if not for Dagfinn’s timely heal. Not that the action was all one way, it just really, really seemed like that. Tersplink and Kerplak established that acid seemed to work on the Golem, which is good if for no other reason that Kerplak put aside his plan to fire the priceless Adamantium puzzle tube relic out of his grenade launcher. Tersplink also cast Displacement on Halvard which, when it really counted, made the difference between having a new friend and remembering that guy they met that the Stone Golem made into jam. Tersplink, who sensed the evil emanations in the cauldron’s fumes but shaken them off like a champ, mad a desperate lunge at the Stone Golem with his tiny dagger. This caused the Golem to slam Tersplink once instead of Halvard twice. When it did swing at Halvard, it was fooled by the Displacement. Don, having recovered from his bout of blind barfing, brought down an Empowered Flamestrike and then Halvard struck it again, infused with the power of OUR LORD IN IRON. I don’t know why anyone would ever write that in anything other than all caps. The Stone Golem was fatally riven and returned to simple stone once more.

I’m sure at the time, the Golem of Prague was terrifying, but it’s kind of adorable now. It looks like it could be Gumby’s roommate.
And that’s where we left them, ready to step into the passageways that lead to the displays of armour.

← I’ve realised I have no idea what Torgor looks like.
Huge leak of new Necron models →

2 Comments on “The Acts of the Lords of Rannick, XXXVI”