This isn’t quite a review of Skyrim, there are better ones out there that you should read. But this is what I think of Skyrim and also an explanation for why the last gaming session’s recap hasn’t been posted.

I was ready to devour Skyrim this weekend, to eat up a chunk of the main storyline, digest the narrative as quickly as possible and make progress through it.
.
I didn’t and for a reason that is now clear after sinking so many hours into it: Skyrim is not a delicious, finite hoagie sandwich that one can eat from one side to another; Skyrim is an infinite open-faced Smørbrød sandwich and you are eating it from the middle. I should have eaten lunch before writing this.
.
A lot of the other reviews I have read of Skyrim frame the game in terms of Oblivion. Obviously a lot of people have fond thoughts of Oblivion, but I’m not one of them. I played the PC version for a short time and then stopped, because I couldn’t bear the clunky interface and scrotally ugly faces. Part of that may have been that I am now so accustomed to interfacing with games through an XBox controller that keyboards and mice just don’t work any more for me. But I don’t think it was – I was playing Oblivion a few years after it had come out and it was long covered in the dust that other, better games had cast over it in their wake.

So I’m not going to frame this in terms of Oblivion because really, there doesn’t seem like a whole lot tying the two together. I don’t recognise the interface at all as belonging to Oblivion; this plays like Viking Fallout 3. It is a Bethesda baby after all. Apparently it has the trademark Bethesda bugs, but I haven’t noticed many and they were all small. Nothing like as bad as F3:NV.
.
While Fallout 3’s interface was dominated by the PIPBoy interactions, Skyrim’s is not, just a regular text based menu system that is easy to use and a damn sight less confusing than Dragon Age’s. The weight/cost layout, the crafting layout, that’s all going to be familiar to Fallout 3 players. The text is narrow, however, so Rolland: you’re gonna need a bigger TV. I have a hard time believing it will be legible on smaller or non-HDTVs. I’d be hard pressed to say exactly where Skyrim and Fallout 3 mesh. Is it the Perk system? The constant food scavenging? The countless interactable objects with no real use? The craft system that seems a lot like F3:NV? Is it that you remain dirt poor for a while and then there is a sudden tipping point where you seem to have more money than you know what to do with? All of these things.
.
I think it is maybe that you start off with a clean slate. Fallout 3’s protagonists are whatever you make them. So to in Skyrim. Unlike Dragon Age or Mass Effect, you don’t play a class. You play however you like and the skills involved in how you play grow around your character. Sneak around a lot – your sneak skill goes up. Hit people with two-handers – your two-handed weapon skill goes up. Talk to people and sell things – your speech goes up. You can augment these things with Perks, but you don’t need to – actually you can use entry level perks to bolster your weaknesses. You aren’t playing a mage or a thief or a warrior, you’re just playing however you like and you can focus on whatever you want.
In that sense, Skyrim appears to extend the Sandbox idea to two other areas of game design beyond the geographical – Character Design and Questing. The character building is essentially open to whatever you like (you just can’t play a left-hander ) but the quests now have the same kind of expansiveness as the terrain. There’s the main storyline, a few other storylines – each of which could fill a decent sized game and each of which have more thought put into them than Bulletstorm or Rage, then there’s just a shit load of other quests and people do not stop giving you them. The idea of completing this game seems unlikely, just given that quests will keep being generated. So now instead of the finite quests available that led you to “finish” a town, the open geography is now populated with open story, constantly replenishing itself. 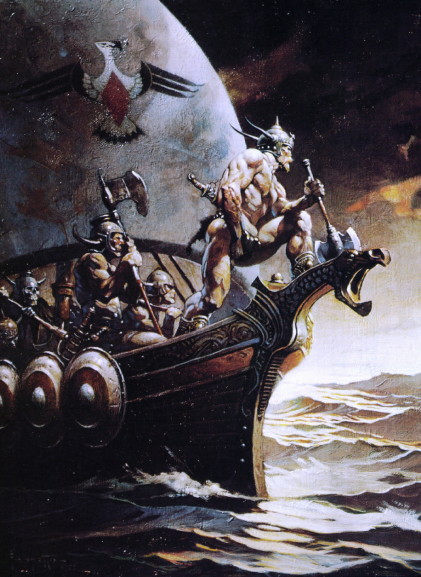 The good ship "Free to be Me and You" sets sail.

The scale of the game is so changed from other Fallouts or other RPGs that it is going to bewilder some people. Some people are going to have 20 quests in their log and become exasperated and think “what am I doing?”. The answer is “whatever you want to”. Don’t want to help that little girl find her dog? Fine don’t. The world will move on. You just have to stop thinking about this as a game to be completed and start thinking about it as a game to be inhabited for a while. That’s going to wear on some people: you’re going to hear of people getting bored of Skyrim before they ‘completed’ it.

"I said I'm too fucking busy to help you find your dress! Don't ask me again!"

The lens through which I’m telling you this is 14 Expert levels of Kord the Reiver – a Nord with a penchant for two-handed axes. I never play melee guys in video games if I can play ranged guys, preferably mages. But I hated combat in Oblivion and figured that if this game could intrigue me with my least favourite style of play, it may have something. I’m happy to report that between the ease of movement/turning and the ability to toggle between 1st and 3rd person view, I’m having a blast with Kord and his huge fuck-off axe. In easy fights, he wades in and slashes until nothing is left. In difficult fights, he skips back and forwards, chooses his moment to power strike. It isn’t what I usually like, but it is working out. The finishing moves in Fallout 3, the slow-mo death of your last opponent in a melee, were okay. The slow-mo finishing moves for two-handed melee weapon power strikes in Skyrim are super fucking satisfying. Schlorp!
.
After Kord, I made a more typical character for me, a sneaky multi-tasker. Having ascended the learning curve with Kord, it only took me 6-7 hours to get to level 9 on Adept (Normal?) level. I actually miss Kord’s facility with combat – magic in one hand and sword in another is more involved, but a more tension filled way of fighting. Other than the main storyline quests, I repeated almost none of the same quests all the way through level 14 for the new guy, Elgrr, a cat dude who keeps a left hand free for whatever spell I need most.
.
There are a few things that are worth picking up from the wee book that comes with the game. I’m not talking about the game guide, that’s the size of a medium-sized town’s phone book. Here are some things I wish I knew then that figuring out since have improved my enjoyment of the game, if you are going to get the game, pay attention:
.
+ Melee combat goes like this: Quick strikes can be blocked by shields/parries. You overcome shields/parries with power strikes, which will then “Stagger” (stun) your opponent, letting you get in a lot of unanswered quick strikes. So open up with some quick strikes, wait for them to block, then stagger them and hack them to pieces. If you are the one blocking, stop when you see a power strike coming and try to move out the way. Once you figure this out, it stops becoming a free for all button-mash and becomes a delicate seduction the end result of which is you stroking their skull into the dirt with your axe.
.
+ Swords are fast and critical a lot but only stagger on power strikes. Axes are moderate speed, critical moderately and stagger randomly on quick strikes moderately. Maces are slow, rarely critical, but stagger on quick strikes more. Daggers are pointless unless you specialize, in which case their critical damage is insane.
.
+ You have to recharge magical items. You do this by trapping a soul from a kill in a gem. You need that spell to do this.
.
+ You have to try each alchemy ingredient you find in order to find out what it can be used for. Once you know, you’ll always know, but if you try a whole bunch at once, their visual effects play out (not their actual effects) which can be oddly trippy.
.
+ The elves in the character generation screen all have gigantic eyes. The elves in the game do not. I assume their “Eye size” slider is set to comically large by accident.
.
+ You’re going to think those cat guys are dumb until you go into your first barely lit cave and forget to bring a torch or you’re trying to find the tiny object on the heathery heath at 2am in a rainstorm. Then you’re going to wish you were a cat guy, because they get to see in the dark for free. Since detection of stealth relies in part on lighting, being the only guy in the cave who can see shit makes for a hilarious backstabbing experience. 10 out of 10 Skyrim inhabitants agree that dirty brown tunics are in this season.

+ Bows are shit at first. You’re going to see Elk and you’re going to want to shoot them. But they’ll just walk away, annoyed.
.
+ Attacking from stealth gives sneak attacks, even with bows. Creeping all the way up behind someone is hard at first, shooting them from stealth is easy.
.
+ Save often mid-dungeon. Things can go really badly, really quickly. But never so badly that a second crack won’t do better.
.
+ A lot of special powers can only be used once a day, be careful with them.
.

+ Catch Monarch butterflies. You make healing potions out of them. Pansy.

.
+ People who complain about the dragon fights in reviews are fucking dumb. The dragon fights are great: from the response of villagers defending their homes to the frantic sky scanning you have to do as the thing circles and strafes, to the point where it lands and the rubber meets the road to the accomplishment of beating it and going all MacLeod on it’s soul; they’re fun. Awkward, hectic fun.
.
+ There are a lot of black guys in Skyrim. Which is awesome, because it is really difficult to search the internet for Viking pictures and not end up at Stormfront and I feel the number of black guys is kind of sticking it to them. Also, in the game, super-white people land is right next to black-people land, so the diaspora is the only thing about that that makes sense.

← To all the bosses you’ve slain before…
The Acts of the Lords of Rannick, XL →