The Acts of the Lords of Rannick, XL

Uh, so, we played a game last week, right? It all seems so far away now…
.
A quick, not very detailed recap:
.
After rifling through Mokmurian’s corpse and belongings, the party settled down to a good thorough inspection of the room. While Kerplak assessed the value of the arcanist equipment set up around the room, Mokmurian’s bag of holding was delved into, turning up enough spell components to keep Albedon going for a very long time and a pouch of diamond dust worth quite a bit. Turns out it would be worth a lot, pretty quickly.
.
It was the Cleric of the stoic god of Battle that eventually reminded everyone that they were on a rescue mission, not just a raid. Halvard pointed out that the Sandpointians were still missing and that maybe that should be a priority. With everyone ready to go, the decided to check the huge double doors they had bypassed earlier.
.
Unlocking them with a sihedron shaped key they had found on Mokmurian, the double doors swung into a well lit circular chamber with a round pit or shaft in the floor. The floor was taken up with reading desks, plinths and comfortable armchairs, all in pristine condition. An exit on another wall was blocked by rubble, but other than that, the place looked well preserved. As they took it all in, a small mechanical device waddled over to them. Basically cylindrical in form, supported by an uneven tripod of legs, with three flexible arms extending from a torso beneath a three-lensed head, the device addressed them in tinny sounding Thassilonian. The device catalogued the number of books, scrolls and manuscripts kept in the “library” and asked if it could help them find anything. The central shaft was investigated, a 60′ deep well lined with crammed bookshelves, but with no discernible way to retrieve the books.
.
The device answered some of their questions, but didn’t know much about anything beyond the library. It was able to guide them to several key texts regarding Thassilon, Karzoug and this complex, the Monastery of the Peacock Spirit. Several party members made forays down the library shaft to retrieve the texts, which Dagfinn then placed in the Bag of Holding to review later. 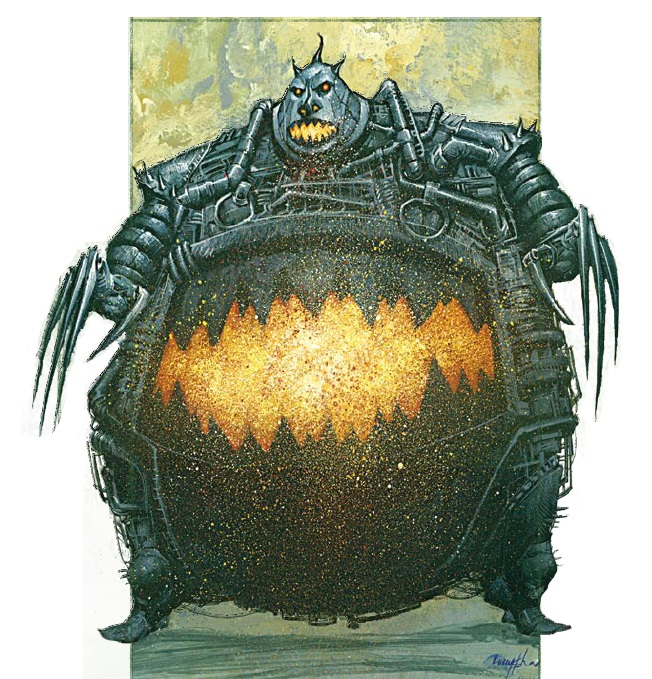 Again, someone had to speak up and remind everyone of the captive’s plight, so they left the library and the robot-thing and went back up to the main spiral. As they approached the spiralling ramp back up to the caves of Jorgenfist, the Scanderig reappeared, spewing molten iron over the party, walling off Dagfinn and Kerplak and scorching others with fire. The Scanderig hopped in and out of the wall, preventing people from putting too much damage on him, but eventually fell to a combination of spells, melee damage and Arradin’s criticals, of which the night saw plenty.
.
At the top of the ramp, the party encountered a picket of Stone Giants, who seemed somewhat nervous and dismayed at the party’s arrival. They made it clear that they were here at the bequest of Conna. The Stone Giant army had started to fracture, they related, some siding with Conna and taking a cautious approach to the party’s raid and others led by Teraktinus, who assumed command after the death of Galenmir. They didn’t know where the captives were being held, but it was deduced that there was really only one room in the complex left. The Stone Giants allowed them to go to it.

This room was vastly different from the caves around it and with more in common with the architecture found well below. A vast hall, it was vacant, save for seven tree trunks driven into the ground around a sihedron star. Another sihedron adorned the far wall. Beside each tree stump a brazier glowed, the tools of branding clearly visible. The party approached the ring of trunks and found captives chained to them. Some had already died, four yet lived. As the front line advanced to free the captives, the middle of the chamber erupted as a huge giant (that is, big, even for a giant) burst out from it and shook the earth. Everyone kept their feet, momentarily, before the giant advanced, greatclub in hand and put down Tersplink and Don. The punishing blows would surely be too much for any mere mortal, but Albedon cast Stoneskin on Arradin as she advanced, that Diamond Dust coming in super useful as a necessary spell component.

The first rain of blows told on Arradin, but protected by Stoneskin, she survived, only to have the giant bat at her ineffectually the next round. With Kerplak sniping from a dark corner, Albedon pushing spells through the giant’s spell resistance and Arradin going toe-to-toe and criticalling as she went, they turned the table on the giant and put him down with a resounding crash.
.
That’s where we left them; one Jotunblood dead before them, four captives still alive and a divided army above their heads.